Dr. James A, PhD
If I have a job that is 30 miles away, having a car is not optional. My town may have only one mechanic. However, he’s a foul mouth jerk. I have no other choice but to sit through his diatribes and complain about his language, and even his sexist remarks. I explain I’m a Christian, and his language is offensive. Nevertheless, his record for fixing cars is impeccable. Nobody in town disputes that. He replies that I can take my car some where else. But, if I don’t get to work, I will lose my job and be unable to support my family.
I’m going to keep voicing my complaints about his attitude, but since he’s the only choice I have that I know can fix the car, I’m stuck. Allowing him to fix my car is not an endorsement of his behavior, but I have to weigh options against less than favorable alternatives.
This is how I feel about Donald Trump*. The recent release of an audio of him degrading women is despicable. There’s no excuse for it. It is offensive to me as a Christian, as a husband, and as a father. However, at this point, it’s Hillary or Trump, and in spite of Trump’s immoral rhetoric, he’s on the right track politically to getting America back in the right direction. Furthermore, Trump has a Godly running mate in Mike Pence, who I hope can be a good influence on Trump. Christians keep losing ground every four years, and our choices keep getting worse. Perhaps, if Trump wins, and the church does OUR job, the future candidates will give us greater options.
What liberals and the Gestapo Media want from these Trump Tapes, is to make this the standard on which the election should be decided. However, the liberals ignore Bill Clinton’s track record of raping women, and Hillary Clinton intimidating them into silence and laughing about the victim of child rape she attacked on behalf of her client in 1975. To further explicate their hypocrisy, these liberals recently made a spectacle out of Trump with a naked statute placed all over the country (it was a trending topic on Twitter called #NakedTrump), which are now being sold on E-Bay as miniature figures. The double standards of the far left are astounding, and yet they expect us to drop support of Trump over an asinine comment he made 11 years ago while virtually silent on these scandals surrounding the Clinton Crime Syndicate.
Moreover, we are on the brink of an INEVITABLE nuclear war with Russia thanks to Hillary & Obama. Hillary even helped Russia get the fuel for the war. Recent email leaks have tied Hillary to using the Clinton Foundation to secure uranium for Russia (for ignorant liberals, uranium is used to make nuclear weapons).
Leaks have also exposed Hillary staff rigging the election that knocked her Democratic opponent, Bernie Sanders, out of the race: which subsequently lead to the deaths of several DNC staff. And the DNC debacle isn’t the only deadly statisticsurrounding the “Clinton Body Count”.
The Clinton’s talk of supporting the black community is a joke. Hillary ridiculed the disparate sentencing schemes that she claims unduly subject blacks to harsher sentences under mandatory drug laws. Perhaps it is her failing health that provoked a bout of amnesia since it was her husband that passed the mandatory sentences for those crimes in the mid-late 1990’s. Hillary opined that blacks were “super-predators” that should be “made to heal [like a dog]”. (That preceding link is from a source very antagonistic to Donald Trump. Thus any Black Lives Matter advocates reading this have no grounds for claiming bias.). Hillary considered a Grand Wizard of the KKK , Robert Byrd, (The KKK endorses Hillary) a great man and hero, which was defended by Bill Clinton because “he was just trying to get elected”.
Hillary helped stage a coup in Honduras, overthrowing a democratically elected leader, and leading to the assassination of a political activist that opposed Hillary’s involvement. Of course, the model for Hillary’s actions are based on a Satanic socialist she calls a hero named, Saul Alinsky. In fact, Hillary’s college thesis was written on Alinsky’s “Rules For Radicals”. Is it any wonder that the terrorist group, TALIBAN, has now also endorsed Hillary?
When the Clinton’s left the White House, they reported that they were “dead broke“. Since then, they have acquired literally millions upon millions of dollars through defrauding Blacks and Latinos (see Clinton Cash) and by accepting foreign donations from terrorist countries, while keeping 96% of the profits through their various foundations. 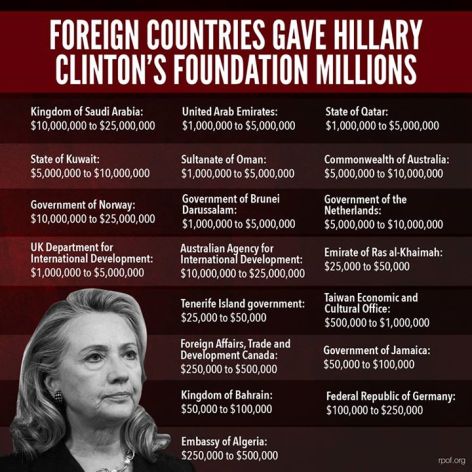 Wikileaks has also release a series of new documents further exposing the Clinton’s scandalous empire to mandate open borders and ignore terrorist threats.
Hillary has made this a political issue in the same manner she did with comments about a Mrs. Universe contestant. Though shortly after politicizing the issue with a “Mr. Trump, Words Matter” campaign, email leaks revealed she attempted to have the founder of Wikileaks, Julian Assange, killed by a drone strike. Keep in mind, her “words matter” slogan was to convince America that Trump shouldn’t be around nuclear codes because of a ridiculous comment he allegedly made about “Miss Piggy”, which is clearly far more dangerous than threatening to drone-strike your nemesis.
I could write more, but I’d like to post this before the election. The list is virtually endless. The Hillary campaign is an extension of the massive globalist agenda propagated by Obama (although it certainly wasn’t started by him) that is deliberately designed to bring all Americans “to heal” to the ruling elite of the world. Hillary & Obama, with the help of George Soros, are bent on destroying what’s left of Godly American values and culture, and enslaving ever color and creed in America under the umbrella of a United Nations dictatorship. And according to brainwashed liberals, we should just let them do it, because even if Trump is the only mechanic competent enough to fix the American “car”, he said some rotten words 11 years ago. I won’t excuse Trump’s comment, and neither should any of his supporters. Neither must we remain silent on issues that we are still in disagreement with him over while continuing to support his campaign. But those who think Hillary should win by default because Trump didn’t have a filter towards women 11 years ago are in dire need of a thorough brain x-ray. We are not minimizing the severity and crudeness of Trump’s comment. But good night, if Bill & Hillary can get away with murder, treason, rape, leaking classified emails, and then hiding the evidence by hiring a specialist after staff were ordered to destroy their phones with hammers why on earth SHOULD we “dump Trump”??
______________________________
*
I personally think Billy Bush saved this audio for a “rainy day”.  The video shows that the microphone belonged to him. He asked for it back when they parted on the Days of Our Lives set. It would be too risky to bribe Trump with it. So I believe he sat on it for several years and when the 2016 debates came around, opportunity knocked, and he was paid a hefty sum of money by a media outlet who knew it would be critical in the election. Again, I haven’t looked at all the facts yet, and this is my opinion, but Billy Bush is related to George Bush, who has recently supported Hillary Clinton. It was his mic, and this information has been held for 11 years, and released within one month of the election. Billy has recently been added to the Today Show. His net worth is reportedly around 9$M, but we know that’s chump-change compared to the wealth of the Clintons and Bushes. Thus knowing what the leak would do to his own reputation, the pay off would have to be worth it. But I seriously doubt liberals will expect as much from Billy Bush, as they expect from Donald Trump. None of the liberals on social media are calling on Billy to step down from any of his television engagements. Only Trump is being eviscerated. Enough said.

This site uses Akismet to reduce spam. Learn how your comment data is processed.